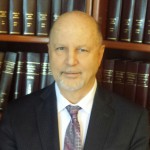 Mr. Jewell began his legal career as a medical malpractice and catastrophic personal injury lawyer in San Francisco, practicing on the plaintiff side with Bostwick & Tehin (1986-1989) and as a defense attorney with Glynn & Harvey (1989-1993).  He defended an officer of Technical Equities Corporation in state and federal securities fraud litigation and successfully represented Point Tiburon condominium owners and commercial tenants in construction defect litigation.  He had his own litigation practice in Hayward (1993-2000), where he also was of counsel to Spile & Siegal, an Encino insurance defense firm specializing in defense of real estate agents and brokers (1997-2000).