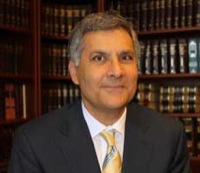 Kevin K. Cholakian was born and raised on his family’s farm in Central San Joaquin Valley, attending public schools in the Tulare and Fresno counties until his senior year in high school when he was awarded a full scholarship for Music Performance (French Horn) to North Carolina School of the Arts (a boarding school for the performing arts), in Winston-Salem, North Carolina.  Mr. Cholakian then attended San Francisco Conservatory of Music on a Ford Foundation Scholarship from 1972-1973. After deciding on changing his career objectives, he graduated magna-cum laude with a B.A. in Philosophy in 1977 from CSUF (Fresno).  From 1976 to 1978, he served as Chief Administrative Assistant to California State Senator Rose Ann Vuich (the first woman ever elected to the California State Senate) where he was responsible for the Central California field offices (covering Modesto to Bakersfield) and the Sacramento legislative office.

He received his law degree from the University of California, Hastings College of the Law in 1981.  At Hastings, he was Associate Executive Editor of the Hastings Communications and Entertainment Law Journal and was a Law Review Scholarship recipient.

He subsequently joined and then managed the defense practice at Kinder, Wuerfel & Cholakian (1988 through 1999), a  25 attorney insurance defense firm in San Francisco.

He began Cholakian and Associates in January 2000.

Mr. Cholakian has successfully defended approximately 55 major jury trials, the majority of which had exposures in excess of $1,000,000.00 and is regularly asked to defend cases that have exposures in excess of $1,000,000.00. His record is 54-2 in disputed liability/disputed causation jury trials. He has “defensed” cases in 16 Northern and Central California counties and more recently in Los Angeles . His first trial as an attorney in 1989, venued in Santa Clara County, in the case of LSI Logic v Ultratch Stepper, resulted in a collected $1.1 million dollar verdict in favor of his client LSI and its carrier AIG (product liability theory).

Although almost exclusively representing defendants in civil litigation over the years, he tried, at the request of a colleague in 1994, Crow v. State of California, a 9 week Alameda Superior Court trial in which the jury awarded his client, Mr. Crow, a $9.5 million dollar verdict, thought at that time to be the largest personal injury verdict in Alameda County by a non plaintiff attorney in the last 20 years.

Mr. Cholakian also regularly defends high exposure UM/UIM matters with a 90% success rate at binding Arbitration, including defense of a $5,000,000 excess UM claim for State Farm that resulted in a reconstruction of the accident 4 hours outside of Calcutta that he personally supervised, on what was then known as the “Highway of Death” and which included depositions in India’s High Court in Calcutta, India.

He has twice been a panelist speaker at the NASP National Subrogation Convention, speaking on product and fire liability issues affecting subrogation recoveries in significant cases.  He also has been designated by his peers 14 consecutive years as a Northern California “Super Lawyer”, a designation received by only 5% of 10,000 Bay Area Lawyers. He was asked to be on a Blue Ribbon Panel by Super Lawyers providing input on potential nominees. Only 11 lawyers in Northern and Central California were designated in the “Personal Injury Defense” category. He has also been selected by Martindale-Hubbard as part of a Blue Ribbon panel that assists in the A.V. rating process.  He has been A.V. rated for more than 20 years.

Mr. Cholakian is in his 18th term as President of the San Francisco Defense Association, San Francisco oldest Bay Area civil defense attorney organization comprised of civil defense litigators.  Eight State Supreme Court Justices have been guest speakers in past years.  Mr. Cholakian also previously sat on the Executive Committee of the Board of Governors of the City Club of San Francisco and has served as Committee Chair of the Food and Wine committee and Chaired a number of  Toys for Tots Auctions for under privileged children. He was previously on the Parish Counsel of St. John’s Armenian Orthodox Church in San Francisco. Mr. Cholakian recently  served on the Hastings College of Law (UCSF) Foundation Board of Trustees.